Here at King British we all love a catfish, with Plecs being a firm favourite. 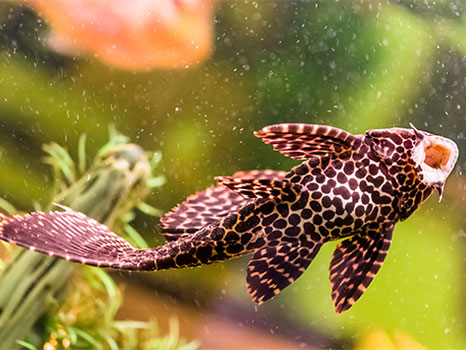 Plecostomus, Pleco, Plec or even Loricariidae

Whatever you call them not only are they the largest group of catfish with over 690 species and more being described ever year. With their unique look, armour plating and attitude to match its easy to see how they have captured fish keepers hearts for years and are now an aquarium staple.

Many new fishkeepers purchase “common plecs”, however this is a broad term for one of a few different species. When buying any fish it’s incredibly important to identify and research as much as possible into that specific species that is being purchased, (this is where latin names and L numbers become really useful). Things to include are water parameters, nutrition, habitat and (especially with Plecs) their potential adult size. It’s not uncommon for some of these fish to grow to 30-60cm. That’s quite an undertaking and with many plecs living for 20-30 years, it’s also a long term commitment.

Many Plecs are often purchased because of their algae eating habits, although there are only a small number of plecs which are beneficial in this way, and some of the best algae eaters in the business grow to well over a foot in length, quickly! The best Plec for algae eating is the common bristle nose (or Ancistrus), not only do they stay a fairly manageable size (5-6 inches) they will do a great job of cleaning up an aquarium without producing too much waste in return. In addition to this as they grow they have a truly unique look about them and lack the aggressive territory protecting instincts which is so common.

The most common misconception about plecs (and unfortunately a regular reason for their death) is that they do not need additional feeding and that the algae growing in an aquarium will sustain them when in fact most plecs feed on dead organic material, especially plant detritus (making them detritivores) in addition to this some species also eat and digest wood, although all Plecs should be in an environment with some bogwood as they use it to graze on as an important source of fibre. Plecs are true bottom feeders and will eat almost anything they can, helping to keep aquariums clean. Even herbivorous species will help to mop up excess food which has sunk to the bottom. 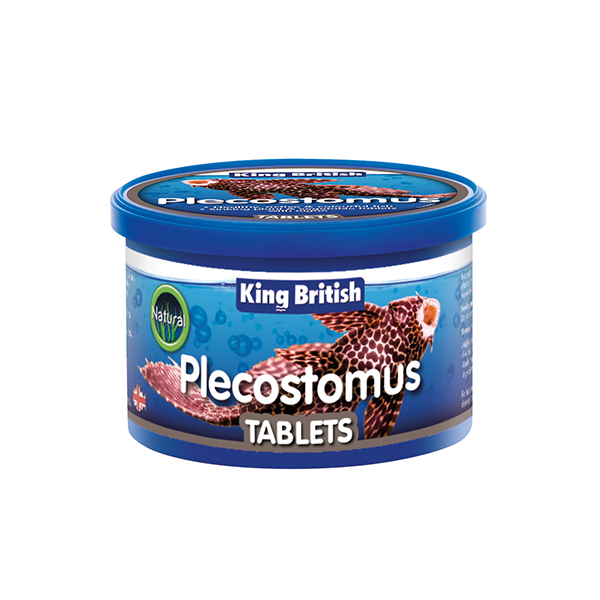 Even aquariums which have a regular algae problem will not grow enough to sustain a healthy growing Plec and they will need additional supplementation to their diet. King British Algae Wafers and Catfish pellets are suitable for all bottom feeders and have a high protein low waste formulation and sink rapidly through the water column. King British Algae wafers remain stable in the water for up to 3 hours which allows for slow grazing, similar to how Plecs would feed in the wild, they also contain our unique Immuno Health Booster which helps to provide a stronger shield against infection and boost the immune system.

Plecs are nocturnal and will often shy away from bright lights they have specially adapted eyes called Omega iris which
allow the correct amount of light to filter in also giving them excellent vision at night. Because of this the best time feed Plecs is in the evening and overnight. This also prevents fish further up the water column from taking the food which is specific for the Plecs. Unfortunately as they are active overnight any damage that they plan to do to the aquarium, including digging up careful aqua-scaping, jumping and picking fights will happen when owners aren’t around to intervene quickly.

While the characteristic round “suckermouths” do have an impact on the way Plecs feed, their primary use is as an anchor. These powerful organs allow catfish to stay firmly attached to the river bed, rocks or bogwood in the fast flowing rivers they come from. Unfortunately for some fish (especially discus, silver dollars and NEED ANOTHER FISH) this can result in injury as some Plecs get the taste for slime coat and will literally latch on to the side of these sorts of fish and gnaw away at their scales. Due to this specially designed mouth Plecs should be kept in aquariums with plenty of flow and high oxygen levels, with tank mates carefully considered.

It’s not uncommon for a previously peaceful fish to suddenly take exception to its tank mates as they grow and mature. To successfully keep healthy, happy Plecostomus (or in fact all fish) it is incredibly important the owner be as informed as much possible on the needs of the specific species they want to keep and be prepared to adjust the tank set up accordingly. Regular water testing, observation and good quality nutrition will help to take care of the rest.

← What do you know about Cichlids?
Responsible Fish Ownership →