A complete guide to fish treats 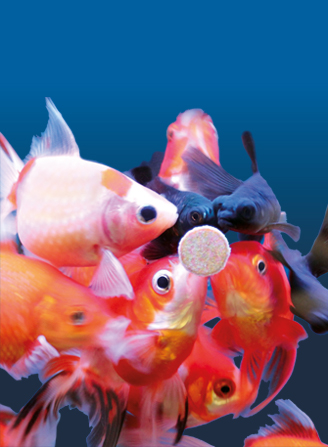 Everyone loves a treat now and again, and our fish are no different. While King British Fish Foods are developed to give your fish a complete diet, giving a few additional treats echoes the variety of food they’d naturally find in the wild.

To make sure fish are getting the best nutrition possible, King British apply the same principles to treats as they do to food. Overfeeding can increase the amount of waste in your fish tank which can have a negative impact on the water quality. So, just as you would remove any uneaten food after 2–3 minutes, do the same for uneaten treats.

While King British Fish Treats have been developed to be highly nutritious, they should still be given in moderation. We suggest treating your fish 2–3 times per week.

These tasty treats are great because they are both fun and functional.

Made from high quality, natural ingredients, and enriched with vitamins and minerals, the treats are compressed discs that can be stuck to the inside of your fish tank so you can watch your fish feed.

For children, this is an exciting, fun way to see fish up close and to get them interested in fishkeeping.

It also provides you with an opportunity to see your fish close up and check for signs of injury or disease.

Browse our range of Fish Treats

Tubifex worms are a rich protein supplement for fish. The worms are freeze-dried to retain flavour and nutritional value, and then pressed into 1cm cubes so they are easy to feed. King British Tubifex Treats can also be stuck to the inside of your fish tank, providing a great opportunity for a fish health check. Suitable for aquarium fish, plus turtles and terrapins.

Bloodworms are insect larvae which are rich in iron and protein, and also promote excellent colour and condition in fish. Like the tubifex worms, King British Bloodworm Treats are freeze-dried to retain flavour and nutritional value. Suitable for all aquarium fish, turtles and terrapins.

Add some variety to your coldwater, tropical or marine fish’s diet with King British Daphnia Treats. Daphnia are tiny crustacea that are full of natural protein, and are sun-dried to retain flavour and nutritional value.

A Guide to Keeping Turtles and Terrapins

Turtles and terrapins make great pets, but require very specific care. Make sure you're ready by reading our guide to the key aspects of turtle keeping.

Why is water quality such a big issue when it comes to fishkeeping?

Why is water quality such a big issue when it comes to fishkeeping?