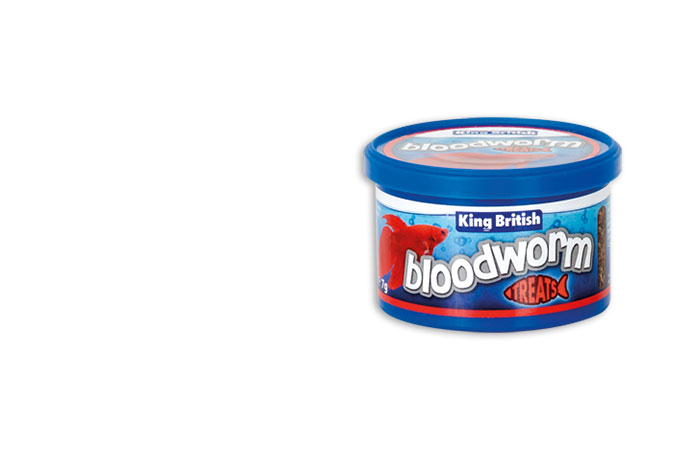 An independent review from Lois, one of our King British fish keepers: 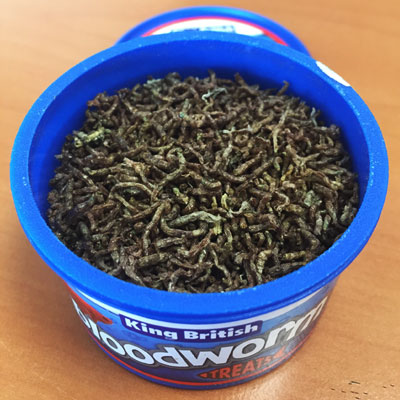 Bloodworm. It sounds revolting but apparently fish love them! I’ve looked into using bloodworm before but I was concerned about contamination with live bloodworm and didn’t fancy keeping frozen blocks next to my ice-cream! King British have freeze-dried bloodworm making it fuss free, but they retain all their natural flavour and nutrition.

They come in the familiar King British blue tub, full to the brim. Due to their standard size and shape, I find that all of my King British pots stack and store well together, but  because it is so full I’d suggest opening the pot very carefully as a few of mine did escape! I was a little apprehensive about how they’d look, but because they’re freeze dried, they’re very light and easy to handle! I can be a little squeamish over “insecty” things, but I had no problems touching them at all. The instructions suggest complementing normal feeds 2-3 times a week. Although the packaging didn’t suggest it, I did pre-soak some bloodworms in tank water first, as I do with most of their food. I’m sure it’s fine not to soak them, but they will float on the top. It may be ideal for top feeders, but the middle or bottom feeders might miss out.

When I put the worms into the tank I hardly got chance to see them as my fantail shot around the tank and ate the lot in seconds. I take it she liked them! My black Moor has poor eyesight and could clearly sense there was something going on as he swam around the tank with his mouth opening looking excited. I ended up hand feeding him some which he gobbled up with gusto.

They both seemed pretty lively for a while after their treat and I have already recommended it to a fellow fishy friend because of it’s safe and easy way to treat all aquarium fish (and turtles and terrapins!) with bloodworm. There was no wastage and the bloodworm didn’t disintegrate so the water stayed nice and clear. I also really liked the fact that you can choose exactly how much you want to feed. With the live or frozen products I’ve looked at in the past, you get a set amount and I’ve always thought that would be too much for 2 little goldfish and I didn’t fancy frozen bloodworms flying around my kitchen as I attempt to cut a block in half!

Bloodworm is high in protein and a great way to complement a balanced diet. It’s what they would naturally eat in the wild, but too much can cause constipation so it is a treat, not a standard diet. I will certainly be adding it in to my weekly routine and am looking forward to seeing how my fish react to more King British treats soon.

What is the nitrogen cycle?

What is the nitrogen cycle and why is it important to my fish tank?