What is a swim bladder? 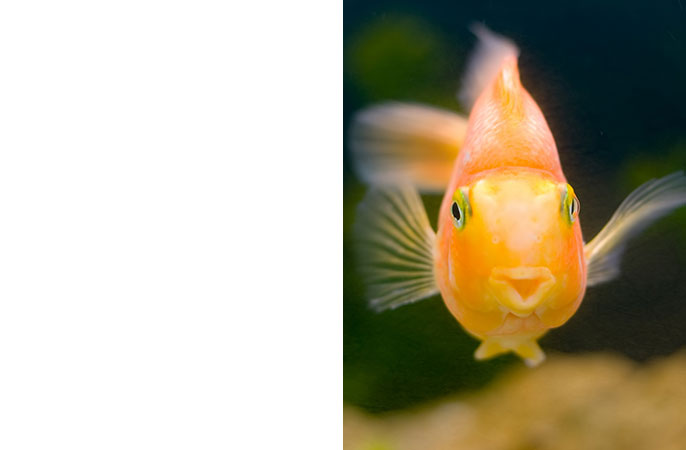 Have you ever wondered how a fish can float in water without any effort at all? Well, it’s all down to a unique organ within the fish’s body, the swimbladder. It’s a ‘sack’ of air inside the body that fish can regulate to remain buoyant at differing levels within the water column.

A swim bladder can best be described as a thin sausage skin inflated with air. It is a very delicate organ which runs centrally through the core of the fish, the length of it depends upon the species of fish.

Swimbladders are only found in boney fish. Sharks and rays can maintain buoyancy in water by using oil within their body. Not all of the boney fish have a swimbladder though; many bottom dwelling species lost theirs as buoyancy is not necessary for them. Most species have a swimbladder that is divided into two chambers (physostomous). Between the chambers is a connection to the oesophagus. Fish can inflate the swimbladder by gulping atmospheric air from the surface of the water and passing it through this connection. Deep water fish that do not encounter the surface of the water have a single chambered swimbladder (physoclistous) that is regulated by the circulatory system.

It’s fair to assume that the majority of fish we keep as aquarists will have double chambered swimbladders.

Whilst the primary function of the swimbladder is buoyancy, other functions for it have evolved within some fish species including sound production, hearing and respiration.

There is a commonly kept fish species where swimbladder disorders are unfortunately common; goldfish. It’s not unusual to see an otherwise healthy goldfish floating around an aquarium on their side or even upside down.

The root cause of swimbladder issues within fancy goldfish are down to artificial selection. Artificial selection is the human process of choosing animal breeding stock to promote a particular trait within the offspring. It’s common amongst fish breeders and is the reason why we have so many varieties within a species. With fancy goldfish, their internal organs that evolved within wild goldfish are now contained within a body that is shorter and more egg shaped than the original body shape. They don’t (but do) fit!

When presented with a wobbly goldfish, it can be very difficult to determine what the best course of action is. If the fish was previously ok, there’s a chance that an additional pressure on the swimbladder has rendered it inefficient - we can sometimes fix this. If the goldfish has always been off balance, it may just be how it’s internal organs are positioned and there isn’t really anything that can be done to rectify this.

What can cause swimbladder problems?

Temperature Shock - Sudden changes in temperature can affect the swim bladder. This is because both air and water have different densities at different temperatures. As the fish’s body is mostly water and the swimbladder is full of air, it’s easy to see how this can affect them. It’s particularly important with fancy goldfish to conduct water changes with water of similar temperature for this reason.

Greedy Gulpers - Goldfish are not naturally surface feeders, but in our aquariums and ponds we like to bring them to the top so we can see (and enjoy) them. Often, goldfish are ravenous and clumsy surface feeders and can often take in air which can potentially over inflate the swimbladder. This will often rectify itself after a period of time, but those with fancy goldfish that are prone to this behaviour would be better served to use a sinking goldfish food like King British Goldfish Sinking Pellets.

Digestive Blockage - Fish are capable of having digestive issues such as constipation. As mentioned earlier, the internal anatomy of a fancy goldfish is rather ‘higgledy piggledy,’ so a blockage in the digestive tract can physically affect the function of the swimbladder. To ease a fish suffering from this, it has often been suggested that introducing peas to the daily diet can help. Blanch the peas by pouring boiling water over them and then crush them before feeding. Adding essential minerals and salts to the water can also aid the fish and these are now available in a liquid format as a solution in King British Swim Bladder Control.

Infection - Internal infections are often very difficult to treat in fish. There are some commercial treatments available that can treat internal infections but realistically a visit to the vet and a course of antibiotics is the best solution. It’s not easy to know if a fish does have an internal infection as opposed to the previously mentioned issues, but the fish’s behaviour may offer some clues as ‘sickness’ can often cause a behavioural change.

An independent review from Jo, one of our King British fish keepers...